You are here: Home › What Can a Concrete Scanner Scan

A concrete scanner can image a wide variety of features inside a concrete slab.

There are three primary factors that control the success for a GPR concrete scanner, given normal conditions. First, the object you are trying to image or detect must be made of material that is unlike the host. When we are discussing concrete scanning, the host is concrete. Therefore, imaging an object that, more or less, resembles concrete is not a good idea. For example, trying to scan for large chunks of granite in a concrete slab may not turn out very well. In contrast, metal, which is highly electrically conductive, responds very well. It is unlike concrete and highly reflective.

In addition to metal, other materials that do not resemble concrete electrically include water (undistilled), salt water (even better than undistilled water), moist clay soil that may fill a crack, air, PVC, wet sand, and shale. Secondly, the object you are looking to scan needs to be large enough to create a response. Without doubt, if you are attempting to locate something very small, like the head of a pin, it is not large enough to reflect a signal back to the concrete scanner. In addition, the problem of size becomes more of an issue with increasing depth. For instance, a 16 gauge copper wire produces a clear response if it is near the surface. On the other hand, if it is 20 inches beneath the surface of the concrete slab it is unlikely to be clearly visible in the GPR record.

It would be nice to have absolute values for these three factors. One could then theoretically determine if concrete scanning would provide good results. Actually, one can calculate the response. In practice, the calculations are seldom gone through because of other factors that play in. These remaining factors, in part, pertain to how the concrete scanner is configured, how the operator collects the data, and the condition of the concrete and the target. Remember, the calculations can reflect only known conditions, which are seldom known.

Now we get into some of the sticky details of how real life conditions respond. Once again, the first obvious question was if the target is responsive to our concrete scanner. Assuming it is, we must next decide if the response is visible in the GPR record. Assuming we know all the details about the conditions within and below a concrete slab, the outcome is often predictable.

However, this is not as straight forward as it sounds. That is, the true conditions of the concrete slab and the targets of concern may not be known or are not completely disclosed. I hate to say this, but more than once, I have had a client disclose only enough details to give me the impression that the concrete scanning services would work well for them. Clients have left out that an area of concern is beneath some equipment or the line they want to image is along the baseboard of a wall. In this case, the line would have responded well but trying to conduct a concrete scan along the corner where the wall meets the floor lead to ambiguous results. That is to say, there was not enough separation between the line and the wall for the concrete scanning results to differentiate between the two. 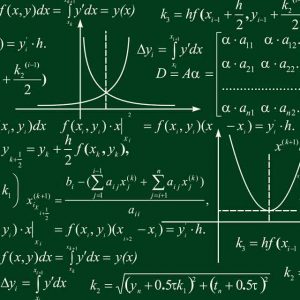 To illustrate what a concrete scanner can scan, we need to assume that extenuating circumstances are not going to be a problem. For example, the following discussion does not factor in all the issues, such as; newly poured or unusual mixes of concrete, obstacles (e.g. walls, equipment, or structures), a large amount of wire mesh or re-bar, a lack of effort, or interference. Interference can take on several forms, for example, steel fibers in the concrete, corrugated decking, known metal structures within the concrete slab (ducting or utility corridor), and other. Consequently, we are left with the responsiveness of the object we are attempting to image with the GPR concrete scanner.

Responsiveness or the Ability to Detect an Object

A lengthy theoretical discussion is good. However, it seems that examples of how a GPR concrete scanner responds may be more useful. The following examples are discussed in terms of whether or not a target responds to a GPR scanner and is the response, more or less, easy to interpret. Please note that the interpretation of a GPR record is never the same as a direct observation. As an example, how many times have you had it rain on you just after the weather person said it is a nice sunny day outside. Even under the best of conditions, there is the possibility of misinterpreting the results. There are no guarantees.

Metal, unless covered by other metal, is very responsive and one of the easier object to image. Metal responds very well to a GPR concrete scanner. Smaller objects are often noticeable at much greater depths than the same size object not made of metal. Metal is usually easy to observe in the GPR record. Because it responds so well, a problem can occur when there are multiple layers, multiple targets close together, or a, more or less, solid layer of metal (e.g. sheet metal, wire screening, or metal fibers). The response from one target can create interference that makes it difficult to differentiate between objects. Similarly, if one tries to listen to a CD and a radio at the same time blaring away in a kitchen, you cannot understand either one very well. 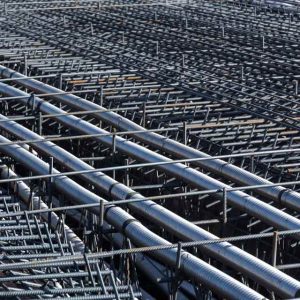 While less responsive than metal, these objects generally return enough of the GPR signal back to the concrete scanning equipment to create an indication in the GPR record. Unless there is reinforcing material concealing the response, fluid filled PVC or plastic pipe and tubing are often straightforward to observe. The ease of interpreting the record depends, somewhat, on the fluid in the non-metallic pipe or tube. For example, salt brine is much more electrically conductive than tap water. The size and depth of burial play a more important role here than with metal objects. The worst-case scenario is if the plastic tubing or PVC pipe is filled with a fluid that has roughly the same electrical properties as the concrete. Consequently, if this is the case then the pipe or tubing would likely be hidden in the concrete. 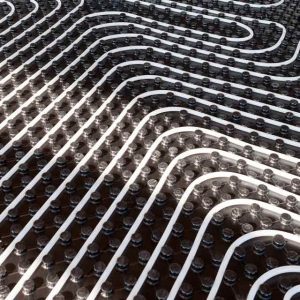 For air filled voids, the dimensions of the air-filled space become more critical. This is less of an issue with metal objects and fluid filled PVC pipe or plastic tubing. Since the content of the void (air) has constant electrical properties only the size of the void determines how well the space responds to the transmitted GPR signal. Given a large enough void space, the response should show in the GPR record. As with the other materials, the thickness of the concrete covering the void, interference, and other factors can compromise the visibility of a response during concrete scanning. The larger the void space the more responsive the void becomes.

Determining the thickness of a concrete slab using a GPR concrete scanner depends, in part, on the base or the materials the concrete slab rests on. A well-compacted gravel base may have a tendency to blend in with the slab. A base that has clay rich soils will respond well. Yet the response from wire mesh found near the bottom of the slab creates anomalies that can disrupt the otherwise obvious reflection from the bottom of the concrete slab. The normally flat lying reflection from the concrete-soil interface may not be clear, if the surface of the base is rough, lumpy, or uneven. The problem is due to the uneven surface dispersing the GPR signal towards directions other than what is below the GPR instrument.

When buried in concrete, drainpipes, waste pipes, and vent pipes (DWV lines) are often easy to observe and generally respond well to the GPR signal. There are factors that can compromise the response. Nonetheless, the bigger problem is often the fact that DWV lines are underneath the concrete slab.

For DWV lines to drain properly, they need to have pitch. While the slope of the pitch is generally constant, a long run means one end of the DWV line may end up a couple feet beneath the concrete slab. This is a problem for recording a direct response from the DWV line since the GPR signal is not likely going to penetrate to those depths. However, a large trench is dug in order to bury the DWV lines. GPR may indirectly locate a DWV line covered with gravel several inches thick by imaging the trench, if the GPR signal can penetrate deep enough to respond to the trench. 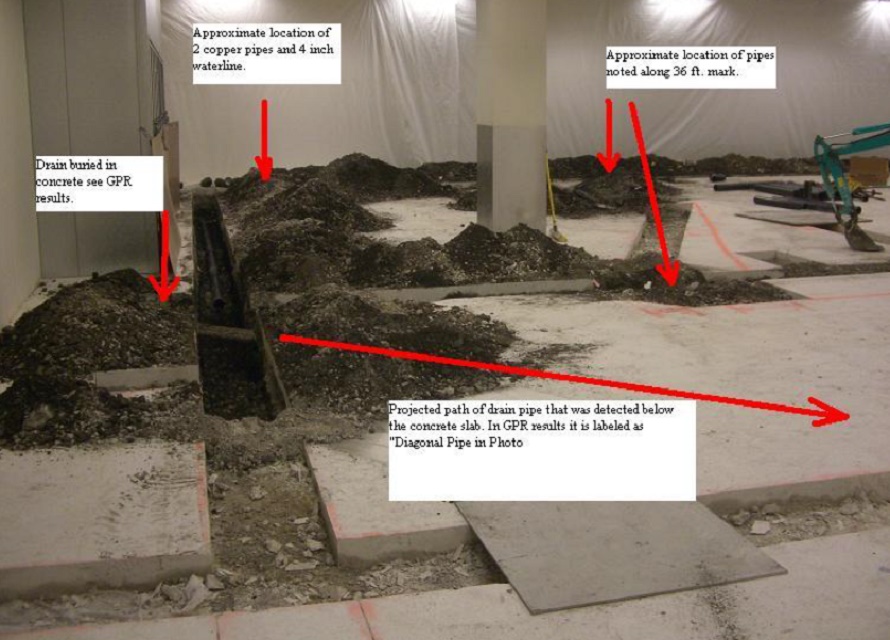 Layout of Buried Pipes and Conduit

Law enforcement agencies may need to look for guns, knives, and other evidence hidden in concrete. If the objects are made of metal, there is a good chance of imaging the evidence. However, if the object of interest is beneath the slab, it could be very difficult to locate. Metal is very responsive and not hard to observe unless it is buried in soil beneath the concrete slab. A body or the void space from a body would likely be responsive if the body is within the concrete slab. Yet it is more likely a body is buried beneath a slab which is not a concrete scanner application. Visit penetrating radar (check for back link) for other applications using GPR.

As with mesh, coins, gold, and silver respond well in concrete. Individual small items need to be near the surface. Be aware that these items may blend in with wire mesh, reinforcing material, and other structural metal. 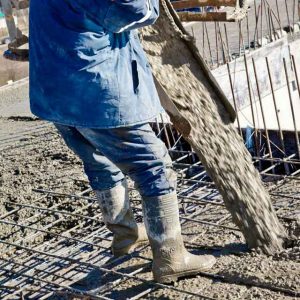 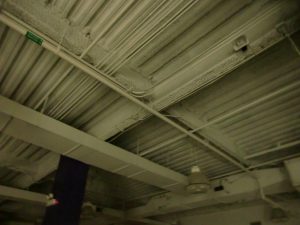